Welcome to the Sand House

Welcome to the official website for the Sand House, a unique and fascinating but little-known part of Britain’s heritage.

The Sand House was a prominent feature in Doncaster, South Yorkshire, from the 1850s until the Second World War.  It was a mansion-sized dwelling carved from solid sandstone by Victorian businessman Henry Senior.  As well as carving the house itself, which stood in a former quarry, Senior excavated into the adjacent ground and created a network of tunnels, decorated with fine and unusual carvings.

The Sand House stood approximately 200 metres north-east of Balby Bridge (which is where the A630 crosses the East Coast Main Line railway). The site is now occupied by a 17-storey tall block of flats named Silverwood House. Click here to view a location plan.

Although the Sand House is no longer physically present, its tunnels, especially, are remembered by a great many people. They survived for decades after the house was lost and they became an unofficial playground for local youngsters from the 1940s until the 1960s.

The unique Sand House plays an important role in the history of Doncaster. Moreover, it is a subject that quickly fascinates all who learn about it, wherever they may be. This has led to the creation of The Sand House Charity, through which this Victorian marvel is being given a new lease of life, inspiring educational projects for new generations. 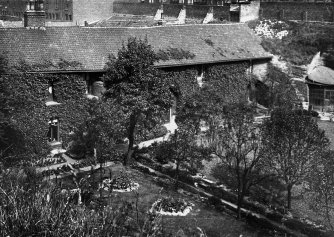 Shop AmazonSmile at https://smile.amazon.co.uk/ch/1171875-0, and Amazon donates to The Sand House Charity, at no cost to you.

Also, you can donate to The Sand House Charity by clicking on the PayPal ‘Donate’ button below. You do not need to have a PayPal account to donate this way: a debit or credit card is sufficient. We thank you most sincerely for any financial help that you may be able to provide.

If you would like to receive occasional emails providing information about events and activities of The Sand House Charity, please click on the button below.

Please note that any information you provide, as part of the subscription process, is kept securely by The Sand House Charity and is only used for the purpose of sending you news updates and information about our activities. We do not share your information with any other group or company, and take the security of your contact details very seriously.

You may view our full Privacy Statement at this link.

Bring the Sand House to as wide an audience as possible

Promote events and projects relating to the Sand House, such as illustrated talks and exhibitions

The overall aim of The Sand House Charity, as approved by the Charity Commission for England and Wales, is “To advance the education of the public in history, art, sculpture and other related subjects having a link to the former Victorian Sand House of Doncaster.”

If you are a teacher and would like to include the Sand House in your lessons, there is an excellent Sand House Education Pack available. Primary school teachers in the Doncaster area can use it as a local history topic under the National Curriculum.

Please visit our Shop page for details of various Sand House mementoes that we have available.

If you would like to receive occasional emails providing updates about the various Sand House projects that are going on, please complete the sign-up form at this link. (You may unsubscribe at any time).